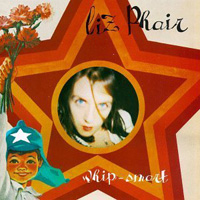 I remember where and when I bought Whip-Smart, because it was so momentous. Exile in Guyville was probably the album that changed my life, and I rushed out to buy Whip-Smart expecting it to do it all over again. But it didn't. There were certain songs that I loved, for sure, like "Nashville," "Crater Lake," "Jealousy," "May Queen," and even the title track. But there were also a fair amount of songs that to me seemed like lifeless filler.

"X-Ray Man" falls into this category.

It lacked the sort of edge that the songs on Exile were ripe with, and seemed more like something Phair had phoned in. And the way she delivered the words "funky baby/lady" always really got on my nerves. Maybe it's just the word "funky" itself. It's not a good word. "X-Ray Man" clocks in at about two minutes, in typical Phair fashion, but it never seems to go anywhere. And among Whip-Smart's songs, this is not unusual.