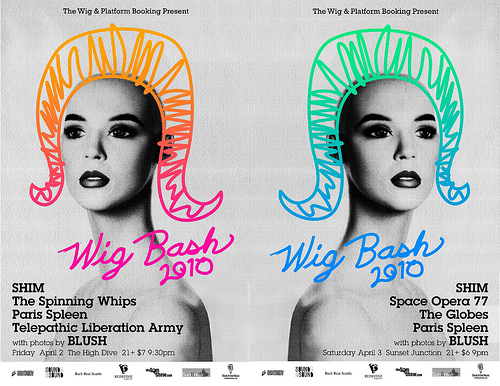 Wig Bash kicks off tonight at the High Dive

There aren’t many people who have amassed as much goodwill in this music community as Ashley Graham, a publicist and writer who balances having her own local, independent PR company, Wig PR, and being the regional publicist for Live Nation. There’s a semi-regularly feature on the Seattle Weekly’s music blog Reverb that responds to her LN press releases. She’s wonderful, lovely and helpful (including always returning my e-mails promptly at seemingly unusual times).

Unsurprisingly, she’s throwing a great party this weekend (tonight in Seattle, tomorrow in Spokane) with some great bands all weekend. It’s become something of an annual tradition (although last year’s was unfortunately nixed by the sudden closing of The King Cobra). Tonight kicks off with SHIM, Paris Spleen, Telepathic Liberation Army and The Spinning Whips at the High Dive (21+, $7) and tomorrow SHIM and Paris Spleen are making the drive to Eastern Washington along with The Globes and Space Opera 77 to Sunset Junction in Spokane (21+, $6).