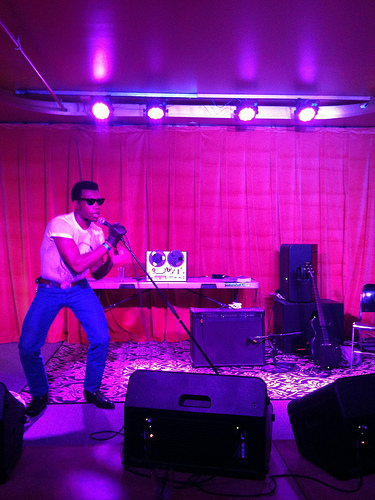 Hey, people in the back, shut the fuck up!" That's how 27 year old Chicago native Willis Earl Beal started out his show at Barboza on Friday, imploring the talkative crowds in the back of the room to pay attention. He got his wish and took the opportunity to read a few lines from Bukowski before transitioning into an a cappella song, which he described as a "warm up." He explained his earlier outburst by saying "I'm not a mean guy, I just want to be listened to, just like everybody else." Fortunately for Beal, once he started singing he had no trouble getting people's attention.

All but a handful of songs Beal performed involved him singing over recordings being played from a reel-to-reel player set up on the back of the stage. Beal has spent time as a street performer around Chicago, so he has experience as a solo performer and working with little additional instrumentation. His money maker is his other-worldy voice, and he gets every last ounce out of it. He was frequently belting out his songs, so powerful at times that the room seemed to take a step back. As he sings in "Swing on Low": "Microphone is my ticket, microphone is my tool." He also showed off his range a few times, working his way up to a pretty high falsetto for one song, then apologizing afterwards that it wasn't as high as he usually likes to go. When he wasn't sitting and strumming an electric guitar for his few slower numbers, he was gracefully dancing around the stage with his Ray-Bans on, a leather glove on one hand, a toothpick in the corner of his mouth, swinging his hips and belting out songs that left the crowd thoroughly mesmerized. For one song he took off his belt, folded it in half, and slapped it against a plastic chair to create percussion.

Most of the songs sung came from his debut album Acousmatic Sorcery, which was released in April. While the songs on the album are frequently lo-fi, stripped-down guitar and piano songs, his live instrumentations sounds significantly different, a point that Beal acknowledged towards the end of his show. "You can buy my album in the back, but the songs on that album don't really sound like what I played tonight." His powerful voice doesn't have nearly the same effect on record either. While Acousmatic Sorcery is a solid album in it's own right, Beal might be better served releasing a live album at some point to really showcase his astonishing voice. With tons of charisma and undeniable talent, you get the sense that Beal has a bright future ahead of him.

It's worth noting that this show also happened to be the unintentional grand opening of Barboza, as construction delays pushed the opening back a few weeks. Barboza is located below Neumos, with a staircase right across from the Moe Bar side door leading to the entrance. The layout of the club is fairly narrow; there are booths in the back, a bar in the middle, and the stage up front, with bathrooms directly across from the bar. At a capacity of 220 people, it's roughly the size of the Sunset Tavern, maybe even a little bit smaller — and a wonderful addition to our city's scene.