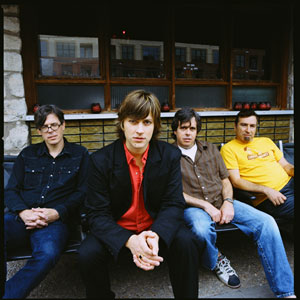 Win some VIP Old 97s action! {visit to their soundcheck, tickets to the show, and more}

It’s immeasurable how much Three Imaginary Girls adore the Old 97s. I personally have been smitten since I first heard the magic line “My name’s Stewart Ransom Miller, I’m a serial lady-killer” waft from the KEXP airwaves {“Barrier Reef” on the album Too Far To Care} within weeks of settling in Seattle.  From that moment on, I’ve purchased Too Far To Care about 25 times to give to friends in hopes of cheering them up / reminding them of the power of a great song.

Years after that first informal radio introduction, I was a lucky part of a three girls / one Rhett Miller interview. If I wasn’t already convinced that there should be a Rhett Miller Rockstar degree program, I was after that lovely afternoon. Like all the Old 97s, frontman Rhett is as kind and friendly as he is talented and {let’s be honest} heartbeat-skipping handsome. My fellow members on the RMR degree program committee compare most frontmen/ladies to him. Rhett is great on stage with the disarming banter and humble dance moves and just as genuine and appreciative off stage when he crosses paths with a fan. We wont name names, but both new and more seasoned showmen could learn a thing or two from him.

And why should you care what Rhett and the Old 97s are like both on and off the stage? Three Imaginary Girls is happy to offer you a chance to sneak into their soundcheck, meet/greet them before their show, and tickets to the big {21+} show at the Showbox at the Market on June 30.

To enter to win this timebomb of a prize, just email us at [email protected] with the subject line “RollerskateSkinny” before 9a on Friday, June 25.