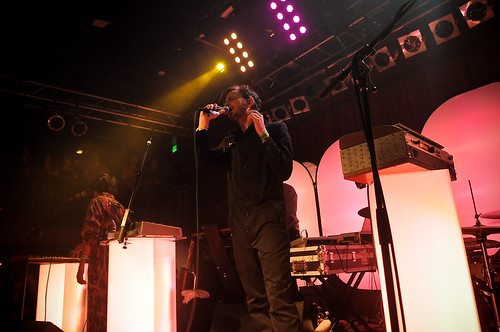 When Yeasayer finally took the stage at Neumos last Tuesday night, it was after anticipation had been building for several weeks. The show was sold out weeks in advance and on Twitter, Neumos said their guestlist was completely full. One person went so far as to offer to bake a cake in exchange for a ticket (an offer I would have gladly taken them up on had I known I had an extra ticket earlier than the same morning of the show). In short, a lot of people wanted to go to this show and they would have likely sold out a much larger club.

It’s not enough, though, to say that people wanted to see Yeasayer as we’ve seen the hype machine get way out of hand in a lot of cases. Yeasayer, though, lived up to the expectations of their show Tuesday night.

Their latest album, Odd Blood, was released earlier in the year and has been a bright spot in whatever it is we call “indie rock” in 2010. It’s not the most consistent album by any means, but its left field approach to pop had quite a few great moments, particularly the catchy-but-still weird singles “Ambling Alp” and “O.N.E.”. They use a lot of afro-pop influences (and get away with it in a manner that the blogosphere doesn’t allow Vampire Weekend to) as well as some south Asian sounds but still sound like a 2010 indie band.

Their set was preceded by another buzz-ish Brooklyn band, Sleigh Bells, who was particularly impressive. They’re a noisy, two-piece dance band with a singer that channels Karen O and a sound that reminds one of Crystal Castles without the 8-bit samples. After a few minutes, I was hooked and can’t wait to hear their forthcoming debut album. One ambitious DJ mashed up their single “Crown on the Ground” with Lil Wayne’s “Fireman” and it sounds kind of remarkable together.

Yeasayer was who everyone came to see, either buying tickets or bartering with baked goods and they sounded great. Their set lasted a little over an hour and spanned both of their albums, Odd Blood and 2007’s All Hour Cymbals, as well as their selection from the 2009 Dark was the Night compilation. It began at 10:45 with the same way Odd Blood began, with the strange opener “The Children” (conversely, the encore began with the last song on the last album and ended with the first song on the first album). They frequently spoke of loving playing in Seattle in general and Neumos in particular for the generous receptions they’ve always received but singer Chris Keating joked that when people booed when they said they’d play one more song (before the obligatory encore) that it wouldn’t help their cause.

On another unrelated note, the show was on April 20 and even at the Yeasayer show, it was a 420 celebration for some as marijuana smoke rafted throughout the packed club.

When it was all said and done, Yeasayer left a satisfied crowd that heard every song from Odd Blood and a few other favorites and everyone seemed to have enjoyed themselves, content that we all witnessed a very good band that lived up to the lofty expectations. There weren’t any real surprises because their two-album catalogue isn’t deep enough to allow that, but it felt leaving Neumos that Yeasayer will be around for quite a while, and that’ll be for the better.