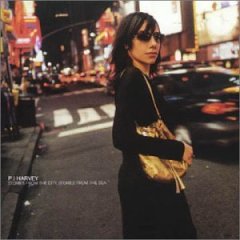 "You Said Something" by PJ Harvey

When Erik Gonzalez told us he'd be out of town this week and we volunteered to cover iPod Roulette for him, I thought it would be a piece of cake. Write about one random song that gets pulled with my morning tea? No sweat. This morning I faced the wheel, and first pulled the Thermals "Returning to the Fold" (off the stunning 2006 release The Body, the Blood, the Machine). Love the track, love the record…. couldn't write a word. So I cheated, dear readers, and spun the wheel again, this time to get another incredibly stunning song from a mind-bogglingly stunning release: "You Said Something" by PJ Harvey, off Stories from the City, Stories from the Sea.

Earlier this week, there was an extensive blog post about what makes for a Perfect 11 record — or does it even exist? — and readers submitted their own lists of personal perfect 11 records. I can't believe I omitted this one. Stories… was eleased a bit before Three Imaginary Girls, in late 2000. For me, it was a soundtrack for my city — Seattle — and my personal misadventures with a dear friend, a dark clove-scented bar, an unworthy heartbreak… not exactly the tales Polly Jean recounts on the album, but her poetic verse documenting her love affair in (and possibly with?) New York City loosely translated and seemed to both support and motivate all my antics at the time. "You Said Something" is intentionally ambigious lyrically, but to me, was documenting a new (and likely passionate though mismatched and short-lived love affair) she had in New York:

"We lean against railings
Describing the colours
And the smells of our homelands
Acting like lovers
How did we get here?
To this point of living?
I held my breath
And you said something"

What did he say? Did he ask her to give up her homeland and stay with him? Did he impart a bit of wisdom that allowed her to continue on some different, courageous path in her life? We never find out, except that whatever it was, it was "really important" and she's "never forgotten."

I've debated with many a hardcore PJ enthusiast about the relevance of this record; many will say it's too poppy or commercially focused to be among her best. I say the naysayers can suck it back and forth. It's with great gusto that I add Stories from the City, Stories from the Sea to my perfect record list (as well as Nick Cave's Let Love In, speaking of PJ Harvey's former romances… where was my brain when I omitted those two records?)