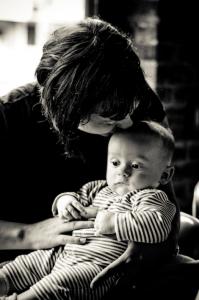 Back in 1996, before there was a Three Imaginary Girls, I had my first huge music crush in Seattle on the legendary band Goodness. The five-piece band rocked my early days in this town in no small part thanks to its incredible front-woman, Carrie Akre (who also fronted seminal grunge band Hammerbox, and boy oh boy do I wish I'd lived in Seattle to have seen them play in their heydey). Goodness disbanded before the turn of the new milleninium, and many band loves have come and gone, but I've always carried a torch for Goodness.

Imagine my excitement when I finally met Carrie Akre last Decemeber, only to discover that we were both extremely pregnant; my daughter was due in January, and her son in March. Not only that, but I also found Carrie was incredibly approachable and cool — always a pleasant when meeting a favorite musician, isn't it? — and we agreed we needed to hang out again once our babies were here.

My wee girl and I had the pleasure of hanging out with Carrie and her little guy Orion at West 5 a few weeks back, where we chatted a bit about rocking, rolling, parenting, and of course, the reunion of Goodness (!!!), who will rock us all this Saturday night August 9 at the Showbox.

{All photos by Kyle Johnson.}

Carrie Akre: Isn't it amazing? Last time we both saw each other we were both pregnant. It's a wild feeling.

igDana: Let's start out with a hard-hitting question: Do you have any of those Rock a Bye Baby CDs for Orion and if so, which?

Carrie Akre: I think I do! We have the U2 and the Rolling Stones ones. We also listen to this Andre 3000 Class of 3000 compilation and a few others, but I don't know about the negative messages in those songs! They all talk about the industry, and how hard it is to just be yourself. It gets me wanting to preserve innocence. I'm trying to recapture that sense now…

igDana: Having a baby is always tough, but even more so when you're used to going to lots of shows. Do you guys still get out much?

Carrie Akre: (Laughs). I looked at Marty at one point right after Orion was born and was like, "We're still gonna hang out, right? This isn't over, right?" Here and there we're starting to get out, but ya konw, how many bars can you see and how much hanging out can you do? We've had enough of it. Being a mom has made me appreciate being slow and having quiet time with him. He fascinates me.

Do you hope Orion will be a musician? If so, is there anything you're doing to encourage (or discourage) that?

Right now I like making noises at him, to imitate his noises. I love just babbling to him. I'm curious if he will be able to sing, or what he may choose to play. If that's what he wants to do, I'd say to go for it!

I'm interested to see what he does. What if he makes music I don't like? What if he's a singer-songwriter guy and he's not very good? When I was pregnant, I called a medical intuitive. She nailed some shit about me that made me like, woah. She said she thinks Orion is going to be a philosopher. It would be interesting if he became an academic.

Really? Is your family musical?

My Dad is, but my Mom's not at all. Isn't it weird to think that when they get old they're going to find out who you are. Like, "Oh, you played music?"

So what's next for you, musically? Do you plan to tour still, now that you're a mama?

I'm going to tour, but just me. That's what tough about being a solo artist; you have to pay each extra person. I mean, viva the dictatorship, but it's spendy, and everyone in the band works so scheduling is tough.

Since gas prices are so high, it would cost me more to drive than fly. So I'm just going to pick places and fly there. I wanna go to Austin. Harris (Thurmond, ex-Hammerbox) lives there and plays in a band. I want to open for him and play Austin, and we'll play some Hammerbox songs together.

I miss getting out of town and the adventure of it.

Do you have another record in the works?

Oh hell no! You know what? It's going to be awhile. When I do make it, I want it to be a little more rocking. I miss rockin' out. But I don't like being so busy that I'm not centered. It's easy to get overwhelmed, and I don't want his life to fly by, to miss out. I want to really focus on him. Sometimes I really want to just move to a small town. Sometimes I'm craving just being outdoors and being on the planet.

You performed this past New Year's Eve at the Showbox when you were seven months preggo. How was that? Did the crowd react?

I didn't have any trouble with breathing. Adrenaline kicked in and I've had years to build up my diaphragm, so singing was never that hard. I had a great time at the Showbox that night! That was a good show to play, and our band really started to hit our groove. Earlier in my pregnancy when we played at the Tractor, I announced, "A lot has happened, I've been married, and I'm expecting. I'm not just getting fat." (laughs)

What are you most excited about playing with your old band again?

I want to make sure I sweat. That's what I miss about playing in a bigger band, sweating. I feel like I haven't used my body in two years, like I now have this sausage suit on and my real body is underneath. Everyone has to keep reminding me: you just had a baby.

Hah, I know how you feel. And I can't wait for the big reunion show. Remind all those in imaginary land where and when they need to go to catch your shows.

August 9th is the big Goodness reunion at the Showbox. Then Goodness will be playing again at the Mural Amphitheatre at the Seattle Center on August 23rd. I'll be playing solo in September 18 at the High Dive with Shawn Smith and Voyager One.


I'd better call a babysitter.