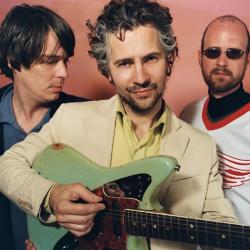 The Flaming Lips, and Beck

Um, what could be more overstimulating than a Flaming Lips show? Perhaps attending a Flaming Lips show as your second Nerve.com blind date in one day… three days after returning to Seattle… following a three month stint out of the country? Really. What was I thinking? Should I even admit I did this?

I guess I just did. Deep breath. Pheeeew. Let it all out…. There. Now allow me to elaborate…

I returned from my epic European vacation only to learn that I didn't get cast on Elimidate. Such sadness. What was a lonely, jet-lagged imaginary girl to do? In my desperation, further fueled by the ennui of an eight day parental visit in South Florida before returning to Seattle, I started browsing — and then responding to — a few online personal ads (okay, like eight. whatever.)

Nerve.com. TheStranger.com. Match.com. Is it just me, or is *everyone* signed up with an online dating site these days? "I'm looking for a cute indie-rock girl who likes to go to shows and hang out." I mean, who WRITES these? Because I go to all those shows, let's face it, we all do… who EVER gets asked out — or even approached — at a show? The guys skulk about with their cool belts and cooler-than-thou hair, and no one meets anyone.

My theory? Everyone then goes home to meet potential romantic associations. Online. Imaginary Dates, if you would. And who would know better about imaginary dates than an imaginary girl? The fact that I have seen many of these hipster-offenders during my online searches has only confirmed my suspicions: we are a town of loners, yearning for romance and companionship, but frightfully unable to bridge the reality gap to walk up and talk to strangers. Hrmph!

Well, I joined in the madness. I had to; a particularly generous imaginary date offered to materialize in the form of taking me to see the Flaming Lips with Beck. I was thrilled. I didn't care if the guy had two heads and both of them were unattractive, he was taking me to Benaroya to see a great show. That's more important (and more reliable, frankly) than chemistry or looks. Plus I figured it would be loud so I could ignore him, if needed. I brought ear plugs.

Here's the Elimidate part: I also agreed to meet another online potential new boyfriend earlier that day. Sure it felt a little weird… but I figured, why not? Whilst enjoying our get-to-know-you coffees, a friend approached our table and asked what I was doing that night.

"I'm going to see the Flaming Lips," I told my friend.
"Hey, I'm going to that show too!" replied bachelor number one.

Still, I headed to meet bachelor number two in the bar at Wild Ginger, undaunted. I was determined not to stress out at the possibility of encountering boy one while out with boy two. I enter the bar and instead see… ex-boyfriend! Wasn't that just neat??! Just who you want to see when searching for blind date.

I found my date… and he was neither toothless, nor limping. He was quite handsome, actually. Really tall. Love that. And he bought me a drink. Love that too. But it was weird, while trying to meet two potential new love-of-my-lifes in one day, and I found myself having a hard time focusing. Must… stay… focused…

I made small talk; I asked what this tall snowboarding dudeman did for a living (file clerk, I guessed? data entry? unemployed web designer?)

Huh. I tried to stay grounded, despite my sense that this was the absolute last answer I expected. In fact, I decided I didn't believe him. Perhaps my sense of bizarre was shifting to paranoia? I decided to quiz him later…

We went to the show. We were sitting in these box seats right next to the stage, so I felt like I should have brought my opera glasses (like I have opera glasses). My head was swimming. Was it the Mandarin and soda or the flashing swirly lights, the audaciously flashing video images, the grown-ups in full-on fuzzy animal suits flailing around the stage, the grindy guitars, the shriekingly gorgeous vocals, the endless quantity of gigantic pink and green balloons…?

Omigod omigod omigod: it was just the Flaming Lips, that's what it was, and I sat dumbfounded. And grateful for those earplugs — I felt like any further sensory input and I might have popped with over-stimulation. Isn't that sad? Completely unable to communicate with my date. Good thing I didn't get on Elimidate after all. I couldn't handle the pressure.

But during my over-stimulation induced madness, I had an epiphany — this was no coincidence, that The Flaming Lips were part of my wacky self-served double blind date day. They were intentionally placed in my path, because the Flaming Lips are the antithesis of every passive-aggressive, self-effacing, anti-social tendency we have here in this shy city. And they were sent to me to share the news that we all need to be a bit more bold. Who needs to meet online!?? There's no need to hide behind a monitor, or anything else!! Be bright! Be loud! Be bold! Play with toys, and meet your neighbors, and love music, and rejoice!!!!!

They bombasted their way through their extraordinary set, replete with 15 volunteers dressed in fuzzy animal costumes and portable lights, wielding fog machine and swinging lights, tossing pink and green party balls around the crowd, imploring — no, demanding — our joyous participation in their musical extravaganza.

Lips frontman Wayne Coyne was the consummate performer, the ringleader in this musical circus. With his distinctive tinny voice in fine form, he engaged the audience at every turn, even stopping at one point to sing happy bloody birthday — and no, I am not using that as a slang British expression — I literally mean that he sang "Happy Birthday to You" to two lucky audience members while smearing his face in (presumably) fake blood.

Another favorite freaky part: during "Yoshimi," Wayne stuck a nun puppet with spiky teeth on his hand, and had her sing into a camera, broadcast super-uber life size over the stage. Disturbing imagery at best. I was nearly withdrawing from full-on freakout status (but laughing, too)…

Then the Lips then thrilled us with an oversized video of a (rather strange looking) beating heart. Ah ha! Here was my chance. I snapped out of my dazed reverie enough to test Senor Doctor:

Touche. I can't argue with that. I guess he really is a
doctor…

Which was further confirmed by the cockroach story. I asked him what had been going on in the ER lately. He told me a guy came into the ER with a cockroach in his ear.

"How did he get a cockroach in his ear!??" I asked, horrified.
"It crawled in when he was sleeping," he answered.
"Omigod! That can actually happen??!" I asked.
"Yeah. Cockroaches can't back up."

He proceeded to explain how he poured fluid into this poor guy's ear to kill the roach, and then removed it. EW! OK, he's a doctor, and clearly I am being punished for doubting him.

Except then there was Beck. Who could doubt the benevolence of the Universe when listening to Beck Hanson play live in the stunning acoustics of Benaroya Hall? He played a lovely acoustic version of the Flaming Lips' "Do You Realize," (and a few other acoustic numbers) before the Flaming Lips joined him onstage for the remainder of the show. They were sensational, with Wayne's wackiness perfectly complimenting Beck's understated stage presence.

Unforuntately, by this point I was exhausted from cheery get-to-know-you speak and awkward moments, my facial muscles cramped from smiling and my jet-lagged brain too mushy to actually write notes or remember specifics. Apologies.

{imaginary promise: by our next issue, I will have emerged from my culture clunk enough to actually write about MUSIC again. really.}