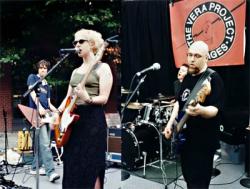 While Hells Belles were helling and belling on the main stage, I headed over to the Vera Stage, where another rockin' girl, Jessie S.K. and her band, Ripley, were performing a most solid set.

Ripley is oft-compared to Throwing Muses, so I headed to the show in eager anticipation. And you know, I didn't find the comparison apt. But this isn't to say Ripley didn't rock; they certainly did. I'd compare their style to a more straight-forward no-bones-about-it rock band like Goodness, with Jessie's throaty but belty voice more reminiscent of Carrie Akre than Kristen Hersh. And coming from me, this is a glowing compliment; Goodness were the first local band I adored when I moved to Seattle. I saw them eight times before they (sadly) disbanded.

But back to Ripley. Jessie plays guitar and sings; with her newly bleached hair and her red leather guitar strap with the stars on it, she heads her band with force, a solid presence. Almost too solid at times, too still. I'd like to see them all loosen up a bit, settle into their songs, and put themselves (and consequently, us) at ease with their music.

"Before you go, take your heart off my sleeve." Ripley play guitar driven rock and roll, with lyrical themes centered on broken hearts and the twisted rubbish they can leave behind. Who can't relate to that? In fact, Ripley is easy to relate to, both lyrically and musically; they rock enough to get the crowd moving, but not so much that you'd be embarrassed to bring your Mom to the show (and after this weekend, trust me, I'm an expert on this).

And just in case you were having trouble identifying with their tunes, what do they do? An imaginary Dana favorite strategy: they played a cover; in this case, Berlin's "The Metro," a clever choice. Without the new wave keyboards to drive the song, Ripley made this one their own, a lower, droller, seductive version, with the guitar covering the melody and rhythmic drumming crashing the song fast-forward twenty years, without diminishing the original sexual nuances. Good shit, and an excellent way to introduce us to their sound by modifying an old favorite.

You know, it was nice listening to a band where the lyrics were mostly intelligible (I mean, we were outside. The best we could hope for was mostly). The fact that they were intelligible plus intelligent was even better:

One final amusing note: halfway through the set, Ripley offered "party favors," free copies of their CD (with cracks in the cases) to the first four people who ran up to claim them. Four ardent fans rushed the stage to grab them before I took my pen off my pad. A few minutes later, when I was checking out the CD at the merch table, one of the kids who got a CD tried to sell it to me — for $3 less than the table price!

Don't these kids know how hard local musicians work? First this kid got to hear the show for free, and then he tried to exploit their generosity, when that free CD could have gone to a decent, hard working, music reviewer — like myself (yes, yes, with thanks to the Dead Milkmen, I will dance to anything…)

Judging from their live performance, the CD is well worth the $10 investment. You can learn more about Ripley by visiting their official web site, and you can also catch them live on Thursday July 18th, at the Sit N Spin. If the Imaginary Girls get this week's issue reviewed in time, we plan to be there.