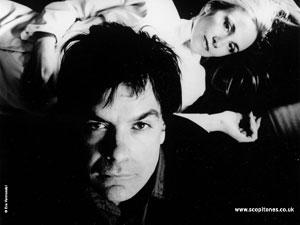 Cinerama in the UK

As a certifiably huge Wedding Present/ Cinerama/ All-things-Gedge aficionado, who has seen them more than a few times, I could hardly wait to see them on their side of the Atlantic.

And my wait was slightly shortened by the lack of opening band. Gedge and Co. humbly took the stage and started off the set with a TWP classic — “Bewitched.” The moment the slow, heart-wrenching guitar with the slight hint of percussion burst into a wall of magnificent sound — I could hardly hold back a tear of utter bliss. From there, the show kept the steady course of faultlessness. The seamless set-list was a nice balance of songs from their new album — Torino (“Cat Girl Tights,” “Starry Eyed”), catalog Cinerama tunes (“146 degrees,” “Wow”) and unearthed TWP tunes (“Kansas,” “Corduroy”).

Throughout the show, some prat in the audience kept drunkenly yelling out various versions of this request: “David, pleeeease play ‘My Favourite Dress’” (which is a fine song from TWP’s first album).

PAUSE FOR A BRIEF ASIDE: Dearest fellow show-goers out there — know that statistics show that only .03% of the time will a band break into a song not on the set-list because someone in the audience shouts it over and over as a request. And, as any Cinerama fan knows, this is even less likely to happen (approximately 0.00000009% of the time) when David Gedge is steering the ship. If it ever has happened, it was most likely just a coincidence. So please, don’t disrupt those around you or embarrass yourself by trying to selfishly fulfill your need to hear a particular song at a show.

But, David brilliantly retorted each time — and used his wit to get the guy to shut up long enough so that they could move on to the next song on the playlist. After the 7th or 8th time the guy yelled out the “My Favourite Dress” request, Simon finally chimed in by playing the first measure or two of “My Favourite Dress,” which proved quite humorous and finally diffused the situation. The band ended the show with their latest single (“Health & Efficiency”) and left us, as usual, wanting more. In classic TWP and Cinerama style — no encore. But that is why I love them. No false pretenses or forcing the audience of going through the motions of begging them to come back.

After the show I was able to chat briefly with Terry (the bass player) and Simon (the guitarist). To give you a full understanding on the next part of this evening’s recap, I must impart two bits of information. First, let it be known that in my book of Imaginary Girl Liz stats two of the superlatives that will forever remain constant are:

So, as I was saying, as I was exiting the venue, I was able to quickly complement Terry on the show and swap opinions on the night’s performance and the behavior of the “My Favourite Dress”-enthusiast. Then, two steps later, I ran into Simon and thanked him for a great show. We discussed how in the world I ended up at the show 6000 miles from home, and touched on the dynamics of the setlist and audience.

But, the conclusion of my brief exchange with Mr. Cleave did not continue along this respectable path. I can only explain away my verbal clumsiness with the above-stated Cleave’s massive cuteness factor.

In only a matter of minutes, I was able to utter a line that has since given me many moments of grimacing laughter. After I told him that I was also going to be at the Manchester gig a few days later I said, “I guess, I will… uh, see you there?” — and he kindly responded with something along the lines of “Yea, I’ll see you there.” With that, the bubble over my head flashed, “Of course he is going to be there, HE IS IN THE BAND!!!” Scurrying for a band-aid to my goofiness, my brain offered up the words, “Oh, yea… you WILL be there.. huhhuh. So, I’ll definitely see you there,” and they flowed from my mouth before I could think of a better recovery statement.

Yes, readers, I agree — there are many better recovery statements I could have used. From there I nervously giggled and said “Ok, so, bye!” and exited stage right. At this point in time, I needed a drink.

And as fate would have it, I was invited to join some new pals Jon and Alex for a drink at a nearby pub. Over the course of a few drinks I learned a bit about the local Liverpool music scene and the location of the cool indie record store in town — Probe Records. The names Ricky Spontane (and their side project, the Rickets), Flamingo 50, Half Man Half Biscuit and Tokyo Adventures were often mentioned throughout the conversation — so they were definite additions to the shopping list for the local indie record store trip following day.

The next time I saw Cinerama was a few days later in Manchester. The evening’s show again took place in a Student Union-type building on the University of Manchester campus. The venue? The Hop and Grape, of course.

An added bonus was that I had actually heard of the two opening bands before and both The War Poets and Degrassi proved to be fine fill for the time between my arrival and the time that Cinerama took the stage. The War Poets are most personally notable as the band whose lead singer wrote an article in the latest issue of Orange Slices (the Cinerama/Wedding Present fanzine). They receive bonus points in my book for using the word “bollocks” in their on-stage banter and providing me with a solid indie-rock infusion with bits of Michael-Stipe-istic lead singer dance moves and 1990’s futuristic keyboard melodies.

Degrassi you may recognize from a recent and rocking Peel Session and they are on the same label as Ballboy. During Degrassi’s set I heard the funniest quote of the night: “They sound like a band on fucking Sub-pop!” I won’t go that far in proclaiming their indie-rockness, but I will boldly label them as the Edinburgh version of Seattle’s subtle-rock-guitar-noisy Kinski.

This evening Cinerama provided a very similar setlist and presented it so movingly, I am sure the (much bigger and less “My-Favourite-Dress-Obsessed”) audience left the venue inspired to immediately acquire all things Cinerama/Wedding Present. I doubt one could ever tire of hearing songs like “Wow” and “Corduroy” performed live.

MARK YOUR CALENDARS: Cinerama is going to be in the Pacific Northwest at the end of September (9/28/02 in San Francisco, 9/30/02 in Portland) and the beginning of November (10/1/02 in Seattle) with Ballboy opening up. Obviously, you will be able to buy me a drink at either of these events.