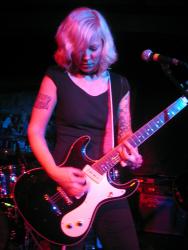 The Heavy Hearts at the Sunset

Saturday night and I love a good bill in Ballard. For those of you not lucky enough to live in Seattle, Ballard is a great little neighborhood just a bit north and out of the way of downtown with a great town center: great bars and restaurants, and a couple of classic show venues, including the Sunset, home of tonight's bill: Shake Some Action!, the Purrs, the Heavy Hearts, and Charles Leo Gebhardt.

I arrived just in time to catch the end of Charles Leo Gebhardt's set, a quiet, kinda folksy lo-fi sort of thing. This would be unexceptional except for the fact the Charles was a member of Seattle punk band the Catheters and is a member of the Tall Birds. I do love a paradox, and I wish I had arrived a bit earlier to see more of what Charles has going on.

And while we're talking about music paradox, tonight's lineup was all over the map. After Gebhardt's quiet, folksy set came the Heavy Hearts, with a full-on garage rock assault. The four-piece thrashed their mop-heads and bounced around and clearly took great pleasure in rocking the ample crowd at the Sunset. The band just completed an intense west coast tour for the past few weeks: it started at the High Dive in Seattle on February 23, took them on four stops through California, and then back for four more shows through Washington before concluding tonight at the Sunset.

If the band were fatigued from the road, it didn't show. They pummeled their instruments through the set, and Denise and Brian seemed to delight in trading off vocal duties (which included some pretty intense screams from Denise).

Also of note: before the show, I was catching up with some friends at the venue and sharing stories about our recent adventures at SXSW. Each of us commented on bands that had used two drumkits during their shows. To that end, I officially imaginarily proclaim that two drumkits is the new violin (which was the new keyboard).

It's apparently the thing to have — and sometimes to great effect. The Heavy Hearts might be spearheading a new indie-rock trend — distinctive to their sound was the use of the double bass. Denise traded off between guitar and bass duties and Slice Kraft provided consistent bass playing throughout the set. When they both hit their four-strings at the same time, the music took on a particularly sinister, thudding sound — definitely to great effect.

You read it here first: double bass is the next double drumkit.

And while we're on the subject of drums… the Heavy Hearts don't need a second drummer, as there's so way they could ever find drum art cooler (and more fitting) than theirs: a clear drum with a realistic and vivid painting of an anatomical heart. Each time drummer Lee Taylor pounded the kit, the drum (and the heart) beat, literally.

(Also amusing was the number of times I had to take this photo without my flash in order to get a non-blurry one, the drum was thumping so much during the show).

I was pleased that the band ended their (short, but fast and hard) set with my two favorite songs from their EP so I could sing along: "On the Breaks" and "Spit When You Say My Name." "You're the one! You're the one!!"

When their set ended, a pal of the band magically (and instantly) appeared at the stage with Jager shots for all. Too bad Liz wasn't there to partake.

The Heavy Hearts are taking a several month hiatus from live shows while they work on their full-length, due out in August on Seattle label The Swingline. Wahoo!