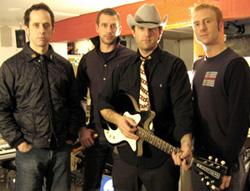 Henry Hanks: I will make time for you

I headed to the Crocodile on a balmy Saturday night, all ready to get my local lo-fi on. With headliners Horses boasting members of the late-great Carissa's Wierd (and a new release on Sub Pop), and openers Henry Hanks promising lo-fi goodness (and boasting former members of other late-great Seattle bands Juno and Automaton), I was prepared to be dazzled (in a gloriously-understated fashion). But the evening surprised me.

First, let me lay the groundwork. Though Henry Hanks is a brand-spankin' new band, the members have a musical history that approaches epic in this town. Frontman Pat Kearney and bassist Chris Duryee were two-thirds of Automaton. Guitarist Jason Guyer and drummer Greg Fergeson hail from Juno. As their bio boasts, "Between the four of them and their past music projects, the Hanks crew have 6 full-length records, 14 national tours and 3 European tours under their belts." As my dear imaginary friend Liz likes to say, "That's a whole lotta puddin'." {She really does like to say that!}.

Part of my surprise was by choice, though. I had access to tracks from Henry Hanks on My Space. I could have known what to expect. Rather, I chose not to listen so that I would have a fresh listen for the live performance.

Live, Henry Hanks is a really good band. But I wouldn't call them lo-fi so much as honky-tonky. They're too loud for lo-fi. Instead, I heard lots of sad-sounding minor chords, expertly executed by some of the most skilled musicians this town has to offer (and tonight's show featured special guest performance on bass by Juno's Gabe Carter — perhaps Duryee was previously committed with his other musical project, Rasrez?), supporting Pat's crisp, articulate lyrics. They reminded me a bit of the band Live, if Live's frontman Ed Kowalczyk had discovered "The Way" in a PBR honky-tonk instead of at some pseudo-spirituality ashram {and by this I mean Mental Jewelry-era Live, long before they started sucking}. I half expected them to break into, "Pai-ai-ai-ain lies on the Riverside" at various points during the set.

Henry Hanks self-compare their sound to the sparseness of Wil Oldam and Smog. But my imaginary friends and I heard more authentic old country flavors (a la Hank or Johnny) than new alt-country (like the aforementioned influences, or say, Jay Farrar).

And I must confess — despite their great sound, I had a difficult time overcoming my sense of uneasiness with the surprise country of it all. I'm a little bit country, and a lotta bit rock and roll. I found it a bit disquieting to see Pat in a cowboy hat.

Could it be that I was disoriented, still growing steady on their alt-country legs? Maybe. It wouldn't be surprising, given the shift in musical genre from their past projects. But the, life is all about growth and change. And after all, as I discovered at the 22/20/Graham Coxon show — alt-country is the new garage rock (more details coming about that soon). You heard it here at TIG first. I'm considering trading in my Absolut Mandrin for a big ole swig of Jack Daniels… Surprised?