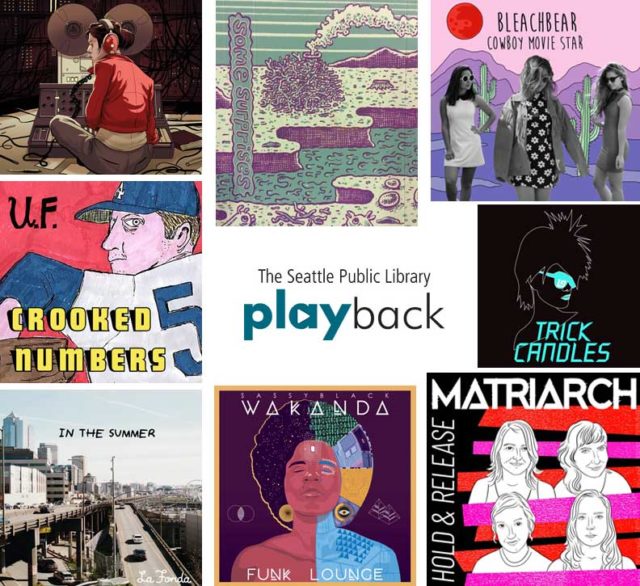 Another reason to LOVE Seattle + our wonderful public library + the Seattle music scene: The Seattle Public Library recently launched the latest round of their PlayBack initiative! NOW the amount of amazing local music at your fingertips (for FREE) is up to 200+ albums!

Playback, in a nutshell, is:

The Seattle Public Library’s PlayBack is an online collection that showcases and shares current local music for free. Seattle’s musical culture is known for its originality, passion and creativity, as our local artists continue to demonstrate. PlayBack helps new audiences discover a wealth of today’s local music.

Through PlayBack, you can:
• Explore digital collections of current Seattle music
• Create streaming playlists
• Download music to a computer or device

It’s a win win for local artists and anyone who wants to hear free, awesome music.

I was honored to be on the Playback judging panel alongside Kelly O,  Sharlese Metcalf, Jonathan Zwickel, Chris Govella and a bunch of awesome library staff – Kreg Hasegawa, Abby Bass, Cameron McCracken, and Kathleen Morley. I know right? With a crew like that it was hard to keep my cool and not superfan out on each one of them.

Go to the PlayBack site and start listening!

The jury collected a sampling of some of the best Seattle’s music scene has to offer – digging in beyond just indie-rock, but also bringing in hip-hop, and even those with international world music stylings.

Mark your calendars for the FREE PlayBack launch party:

Thursday, October 11 from 7p-10p at Barboza (in Capitol Hill)

I will be a part of the MC team in between a couple of the bands (unless I’m gonged off after my first attempt) – I hope to see you there – it’s free and early and will feature performances of three of Seattle’s best (if you’re like me, I had you at “free” and “early” – amiright?).