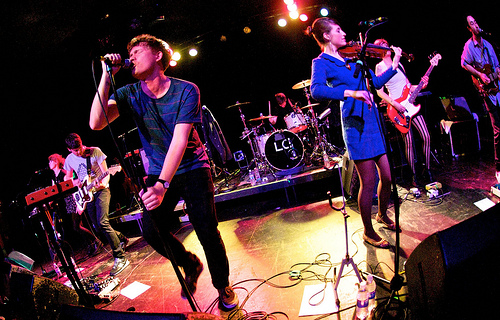 Like Allo Darlin, Los Campesinos are a diligent bunch.  They publish Heat Rash, a seasonal zine complete with a 7" which I am certain keeps their creative wheels moving and their song-writing pens scribbling.  There must be something in the Boddingtons that keeps these two favorite bands pressing new stuff to fill my shelves (for which I can't thank both bands enough).

Gareth Campesinos ne Paisey recently told NME that the band would be returning to work on the follow-up to Hello Sadness in early 2013, adding: "We try to take as little time between albums as possible. If we're not recording or touring then we'll have to get proper jobs. There's no reason to take a couple of years between albums."

That's as good as saying "Hey, Imaginary Liz, please keep room on your Best of 2013 list for our new album!" to me. I can't wait for my ears to bleed from the Sonic Youth slash Bright Eyes slash Hefner slash Bis slash Yo La Tengo slash Beat Happening magic they create.  Maybe they are feeling nostolgic and will draw from their debut album, like Thermals are doing on their 2013 release?

Here's a sampling from their early days that still makes my heart skip a beat: