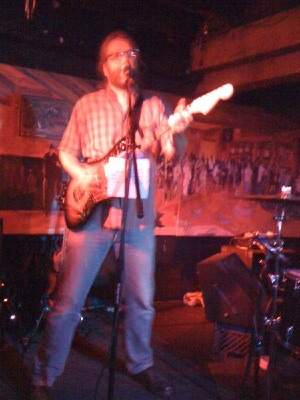 The Long Winters played a secret show at the Sunset last night, and it was actually like, a secret!

Generally speaking, “secret” shows in Seattle go a bit like this — that is, they’re an extremely loudly whispered secret, at best. Barsuk Records are better secret keepers than most. (Remember that secret Death Cab show at the Croc back in 2003? Of course you don’t — because only like 50 people knew about it and actually showed up. But boy oh boy, was that ever a treat for those of us who did make it.)

Last night at the Sunset, the few people who got wind of it had a similar treat — the Long Winters and Telekinesis played an understated secret show, to celebrate Grant from Barsuk’s 30th birthday (happy birthday, Grant!).

The Long Winters haven’t played out in ages, and the band’s set was gloriously sloppy though far too short, and featured Michael Lerner of Telekinesis filling in (magnificently, I might add) on drums. Connsumate frontman John Roderick called out for requests from the audience to fill in the band’s five-song set, consulting with Michael and birthday boy Grant on the final song picks. While they didn’t pick any of mine requests (“Unsalted Butter” and “Stupid”), my imaginary posse and I were thrilled to bits with the songs they did play:

My favorite highlight: when bass player Eric Corson stopped “Medicine Cabinet Pirate” about a minute in and insisted John move his capo and start over. Lerner was enthralling to watch; his enthusiasm and obviously excitement for the set was just obvious. Does anyone else think he bears a resemblance to a young Ben Gibbard, or is it just me? He’s got that cute little mushroom cap head going on…

Anyhoo. We rushed over to the show so quickly, we didn’t have proper cameras or anything, though the lovely imaginary victoria did capture this short and lo-fi video of the tail end of “Car Parts” as proof of the whole event:

Despite the setlist shown above, “Freebird” wasn’t free and made no appearance in the far-too-short setlist, nor did we get to hear a sneak peak at any of the alleged “new songs” John has been twittering about. He did suggest that those of us attending the Doe Bay Music Festival next month might get to hear a sampling.

Cause Freebird isn’t free. Erm, or something.