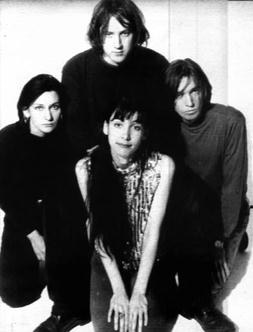 Just as we're all in the throes of summer music festival excitement (or is that fatigue?), I just read a VERY exciting announcement for next year's festival season: according to Brooklyn Vegan, the shoe-gaziest of all shoegazer bands, My Bloody Valentine, will be reuniting to play Coachella 2008. (!!!!!)

While this is incredibly exciting, does anyone else think seeing MBV in the 100 degree blazing desert sun would be a bit incongruous?

But who cares — it's My Bloody Valentine, live!!!

(Aside: Did I ever tell you guys about the year my friend and I decided to make Valentine's Day a costume party and go dancing? She dressed as the Queen of Hearts, and I went as My Bloody Valentine. I wore a little black slip dress with valentine's pinned to it and smeared my arms and face with fake blood. Sadly, only one person the entire night got it — but I think it made his night, at least! And I thought it was funny!}