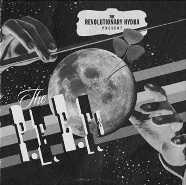 The PEEFs, a pop-tastic new offering from the quirky Revolutionary Hydra, is mixture of mundane noises and endearing metaphor-laden lyrics made me want to giggle and skip.

The album overflows with sparkly space-pop melodies that speak of sputnik, metronome hearts, a moon-base rover, and binary thoughts. The out-of-this-world sound is created by the laying dozens of ordinary sounds over their instruments and voice boxes: a door knock, a car's ignition on, weird galaxy type sounds, and a usually-would-be-annoying eeeeeeeee shriek. Hark, is that a kitchen appliance I hear?

Singer/song-writer/indie-rock honcho Jay Chilcote lazily sings lines that waver between adorable personification and effortless silliness. There are so many quotable lines, it is hard to choose: "Breton was dreaming of a crouton he called love, on a salad made of greener somnolence," and "Buildings straightened their backs with self-conscious self-respect" And nothing compares to the joy saying, "Yeah, my current favourite song is about 'William Wizard Cauliflower, my favourite friend'"

As would be expected of anything that is mixed and recorded by Chris Walla's studio, this is a nonstop toetapping-filled album that is better for you than a box of cinnamon sugar poptarts.

{ed note: Jay Chilcote and co. have a new side project called The Dutch Elms. They've recorded an unreleased gem of pop goodies called "Music for Happiness," an album to open your sunroof and belt-along to during your summertime good-time drives.

As the Elms say, "Music appreciation is very fun but music for happiness is the funnest." So I'm your indie-rock Tinkerbell. If you believe in Jay Chilcote, then clap your hands!  Maybe The Dutch Elms will put out (their debut release) before summer's end. ~igDana}