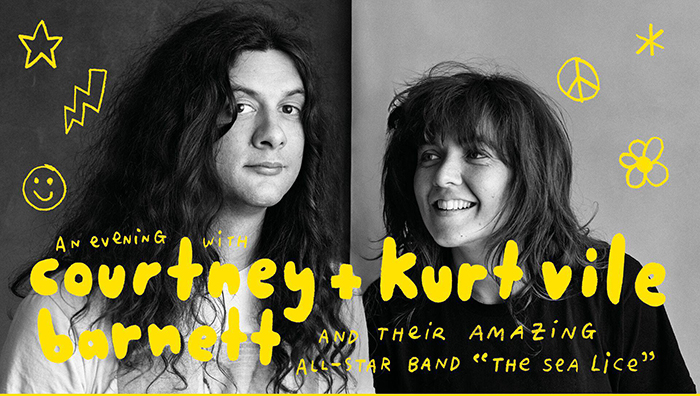 Lyrical wonder from down under, Courtney Barnett, and American soothing singer-songwriter Kurt Vile have teemed up for a new album, Lotta Sea Lice, and you don’t want to miss them when they hit Seattle this weekend!

After meeting on the festival circuit Courtney Barnett & Kurt Vile were both taken by each other’s songwriting abilities and decided to teem up on a few tracks for fun. The collaboration turned into an entire album’s worth of material, and from what I’ve heard so far it’ll make a great comforting companion to the dreary “Big Dark” raincloud that’s about to hit us. Cozy up with this record and warm up your heart!  Don’t take my word for it though, check out this beyond adorable voice swapped video for their first single, “Over Everything.”

Here’s another video for “Continental Breakfast,” about Courtney and Kurt’s blossoming friendship. Their voices and writing styles compliment each other beautifully, and I can’t wait to see how they interact together on stage. I’m gonna be super bummed out if I can’t purchase a button with their faces on it that says BEST BUDS.

They’ll be touring with an All-Star band “The Sea Lice” and opener Jen Cloher, who also happens to be Courtney’s wife. The first single off her new record, “Forgot Myself,” grows slowly into a Patti Smith-esk garage fueled freakout. She’s got a touch of Kim Gordon in her too, and I can’t wait to hear more!

Since both shows are currently SOLD OUT, this post is just serving as a gentle reminder that when someone asks if you want their extra ticket you say YES! Then give them a huge hug and tell them they’re your best bud.