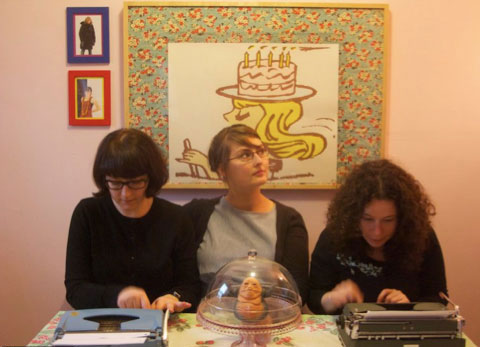 Recommended show: Let's get indie-popolicious at Vera with Brave Irene and Seapony {Saturday, 11/5}

This Saturday (November 5th), shining stars of the indie-twee dreamscape will gather at the Vera Project.  Opening the night is generifus, an Olympia, WA outfit who's new album, I Don't Have To Worry, features Spencer Sult (who handles all primary duties) with Eli Moore, Karl Blau, members of LAKE and others helping out.  As the names of the players suggests, the songs are arid, carefree with moments of both easy-listening joy and innocent melancholy. Best of all, you can easily become obsessed with them thanks to the generifus bandcamp page. Make sure to hear "Good Graces," which channels the whispy, aired meandering of Galaxy 500 that I love so.

Anchoring the show in the middle is Seattle's own crown jewel of Charmin-soft dreamy-pop, Seapony.  Seapony songs are sweet and subtle while filling the air with nostalgic fuzz and reverb… and rumor has it Saturday night's set will feature new songs!  If you still include the Softies in your nighttime prayers, you'll love Seapony.

Speaking of the beloved Softies, guess who's topping off the night!!! (+ even more exclamations implied).  Brave Irene, featuring the one and only Rose Melberg (of The Softies and Tiger Trap, etc)!  If  that isn't enough to convince you to head to the Vera Project this Saturday night, then perhaps the fact that Brave Irene's debut EP was released on Slumberland Records (home of Crystal Stilts and the Pains of Being Pure at Heart and all that is indie-holy) will do the trick?  Brave Irene songs veer away from the introspective, bashful Rose of her recent solo releases. Rather, BI songs run straight into the fire with exuberance and velvety shoegazer swells a la The Primatives and The Bats. Oh, and this is their first Seattle show ever!