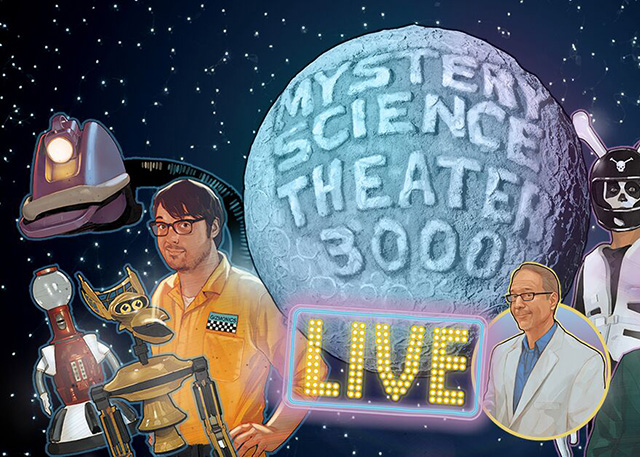 One Saturday night back in freakin’ MIDDLE SCHOOL, I popped the TV on and flipped through the channels mindlessly. Before long I came across an old black and white movie where a giant praying mantis was attacking a city. At the bottom of the TV, three characters were silhouetted against the screen in seats, watching it from their own personal theater. The movie itself was completely AWFUL and they were cracking jokes at nearly everything that came across the screen. I was suddenly in stitches and before long had my entire family in the room truthfully rolling on the floor, cry laughing. We laughed so hard we couldn’t breathe. We had suddenly struck weekly recurring comedy GOLD.

Fast forward to this weekend, and you could actually watch this LIVE! Mystery Science Theater 3000 (MST3K) had many iterations, but at its core, is about a blue collar dude trapped in space with his robot friends, forced to watch horrible movies by an evil mad scientist and her goofball sidekick. MST3K writer, creator, and original space prisoner Joel Hodgson will appear alongside the show’s newest host Jonah Heston, with robot pals Tom Servo, Gypsy, and Crow (Hampton Yount.) The live show will be hosted by mad-scientist and tormentor Rebecca Hanson, with video appearances from series newcomers Felicia Day and Patton Oswalt. WHAT MORE COULD YOU ASK FOR?  Check out a few classic clips below!

The MST3K “Watch Out for Snakes!” Tour features two separately ticketed performances. Early evening moviegoers can catch the classic “Eegah!” about a caveman who goes on a rampage in Palm Springs, and the second screening is a SECRET SURPRISE FILM! I just used way too many exclamation points! Which proves that I simply cannot recommend this event to you more. HUZZAH!

Tickets for both screenings are available at stgpresents.org.