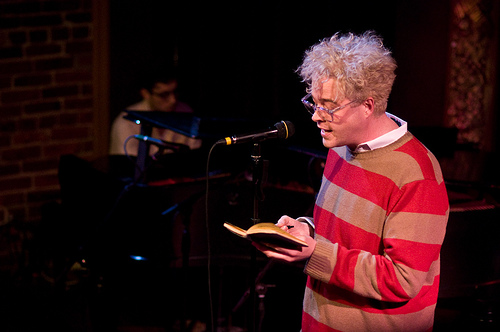 Even though Sean Nelson has been a fixture at many of our imaginary events, we still jumped up and down with excited glee and surprise when he agreed to be part of our Rockstar New Wave Karaoke night on Friday, June 1 at Chop Suey.

It shouldn't be a surprise that he can fearlessly take the karaoke mic and grace us with a favorite new wave hit.  He pretty much aces each theatrical and musical endeavor he takes on.  You've seen him on stage and screen showing off his acting and directing skills, read his quotable works in print, and marveled at his talents in Harvey Danger and the Long Winters (just to name a few of his many musical projects). He's so rock and roll that his new band Sounds Major is playing Barboza the night before (with Kay Kay and His Weathered Underground on May 31st), and yet he still agreed to help us out and take the stage to celebrate our 10th anniversary.

We can't tell you *which* song he's going to do, but we can predict that it will knock your socks off.  Because, well, it's Sean Nelson… singing a new wave hit… celebrating our 10th anniversary.  And that is rad.

Here's a sample of Sean Nelson awesomeness, when he covered the Magnetic Fields at our 69 Love Songs cover night back in 2006: