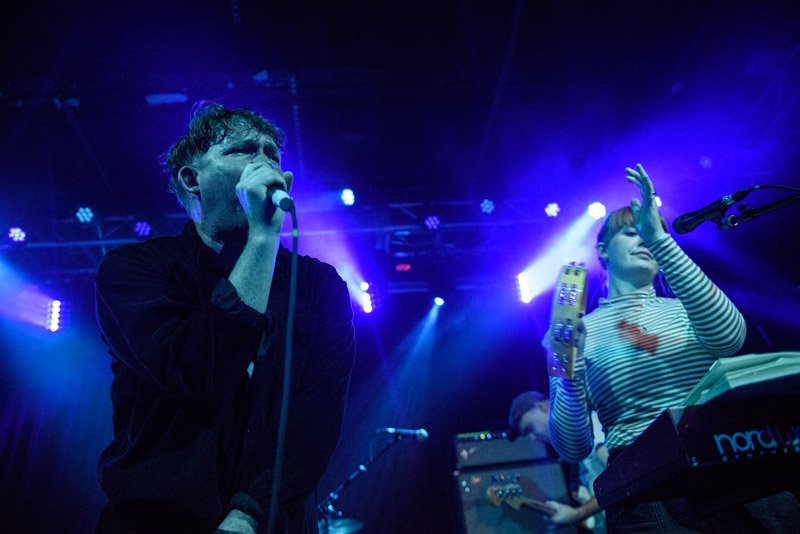 You! Me! Dancing! at the Los Campesinos and Illuminati Hotties show at Neumos

Last week I found myself the farthest from the stage I’ve ever been at a Los Campesinos! show. I couldn’t see much, but it didn’t matter; I was there to hear a bunch of my favorite songs and jump & dance like nobody was watching (which I find easier to do in the back of the room surrounded by latecomers and those who prioritize bar runs to front row sweat). No matter who was where, we were all there celebrate the 10th anniversary of two of my favorite albums, by LC! or by any other band: Hold on Now, Youngster… and We Are Beautiful, We Are Doomed.

The songs on those two albums are still as wonderful as we all remember. They are catchy and coy and at other times slow, methodical and bookishly (errr zine-ishly) carnal. I like all the LC! song types – but love the songs in their live form the most.

Although the band admitted to being a bit jet-lagged, this being only their second stop on their North American tour, LC! energetically jumped into the raucous song, “This Is How You Spell “HAHAHA, We Destroyed the Hopes and Dreams of a Generation of Faux-Romantics”” from Hold on Now, Youngster…

By the second or third song, one of the guitar wielding Campesinos (I couldn’t see which from the back of the room) had even broken a guitar strap due to the phenomenal energy-output (i.e. rocking-out) of the opening songs. Gareth explained that the night before at their show in Vancouver, BC the fella had broken three guitar straps in the set – more than he had broken in the last 10 years combined. Heads up to all the other cities LC! will be visiting on this tour – they are taking no prisoners this time out!!!

Each song was greeted with another round of cheers, but the audience went especially crazy each time the chorus of “For Flotsam” so much so that Gareth’s vocals weren’t needed, we all filled in the blanks:

Knees knocking and blood flowing, so
I want you to know that I want to

My personal favorite and the song I hope for in every LC! set is “Documented Minor Emotional Breakdown #1” from the late 2008 album, We Are Beautiful, We Are Doomed. Gareth mentioned that it’s an album-track song that they didn’t fully treasure for long time… and have only now grown to appreciate. It was a surprise revelation. I thought everyone had a youtube playlist of six different versions of that song so that they could listen to it on repeat?!?

No? Just me? Well, not for long. LC! played the song with such vim and vigor (is that the result of it’s refreshed light of adoration?) that I’m pretty sure others will now be watching those DMEB#1-only playlists on repeat as well. Also, it has a flute on it – a fact I didn’t realize until now and it only makes me love it even more. Bravo, Kim Campesinos!

I expected that because LC! had just released remastered/deluxe versions of their 10 year old albums, the set list would be heavy on those albums. Rather, it was a glorious “best of mixx” of their entire discography. The night was full of “bangers” and wrapped up with the final song of the 2-song encore, right back where it all began – with “You! Me! Dancing!” – the undeniable song with which we all first fell in love with them, a song worthy of all those exclamation points and reverence.

PS – For those who might be interested, the first song of the encore was “Miserabilia” — yeah, I know. WE LUCKED OUT in the set list department!

HUGE THANKS to Brady Harvey for the brilliant photos and for snagging a photo of the set list (I have a freakish nerdy love for set lists and photos thereof). Make sure to take a look at her photos of the Illuminati Hotties set, which I inexcusably missed because, well… life. It makes me extra sad because the photos she got of their set (especially that one with the pointing) makes me love them even more.

“Miserabilia” from We Are Beautiful, We Are Doomed
“You! Me! Dancing!” from Hold on Now, Youngster…